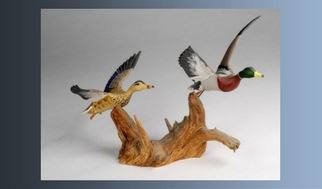 Donated in memory of Mr. and Mrs. A. Harold Castonguay's daughter Ann, the collection includes 40 intricately carved and painted figures of waterfowl, songbirds and shorebirds. Carved by Russell Pratt Burr of Hingham, the birds are in miniature and mounted on pieces of driftwood.

You are invited to come to the West Yarmouth Library to see the birds or you can view them online at the Digital Commonwealth.

The art of carving wood decoys dates back to a time in history when there were many wood craftsmen. Hingham, Massachusetts, was known as “Bucket Town,” for its distinctive wooden ware. Much like fishermen need bait to catch fish, wildfowl hunters need decoys to attract live birds. The South Shore of Massachusetts, particularly Hingham, is home to some of the finest decoy artists, past and present, in the country.

Russ Burr and his family were well-known decoy artists of their day, and their work is highly sought after by collectors today. Burr is renowned for his miniatures, while his father Elisha was a well-known duck and shorebird decoy carver. The self-proclaimed "Whittler" was prolific, selling many through such firms as Shreve, Crump & Lowe in Boston and Abercrombie & Fitch in New York City. Alston "Shorty" Burr continued the family tradition, carving miniatures using his Uncle Russ's patterns. There is little difference in style among the three, and with the exception of Russell Burr's miniatures, one has to look at the signature of the decoy to determine the artist.