Create an Account - Increase your productivity, customize your experience, and engage in information you care about.

This Cairn recognizes the last resting place of the Indigenous Peoples of Yarmouth and was erected by Daniel Wing Jr and others in 1881. The top stone made of glacier rock was found at White’s Path and weighs three-thousand pounds. The inscription reads:

ON THIS SLOPE LIE BURIED
THE LAST NATIVE INDIANS
OF YARMOUTH

The picture on the right shows the Cairn as it would have appeared in 1881 on the south-eastern slope of Long Pond. Over the years the Cairn base became worn down and collapsed.

In 2017 concerned citizens of Yarmouth addressed the deteriorated condition of the Cairn. Subsequently a committee was formed by the Town to restack the stone structure. The committee had the Cairn rebuilt

and refurbished the memorial site with funding through the (CPA) Community Preservation Act. Pictured here is work being done resetting the Cairn on January 25, 2019.

This sign was created to be historically correct and act as an educational tool for readers. It is installed at the Cairn site on Indian Memorial Drive in South Yarmouth. The significance of the border accents the purple color of the abalone shell and wampum used by the local Indigenous Peoples. 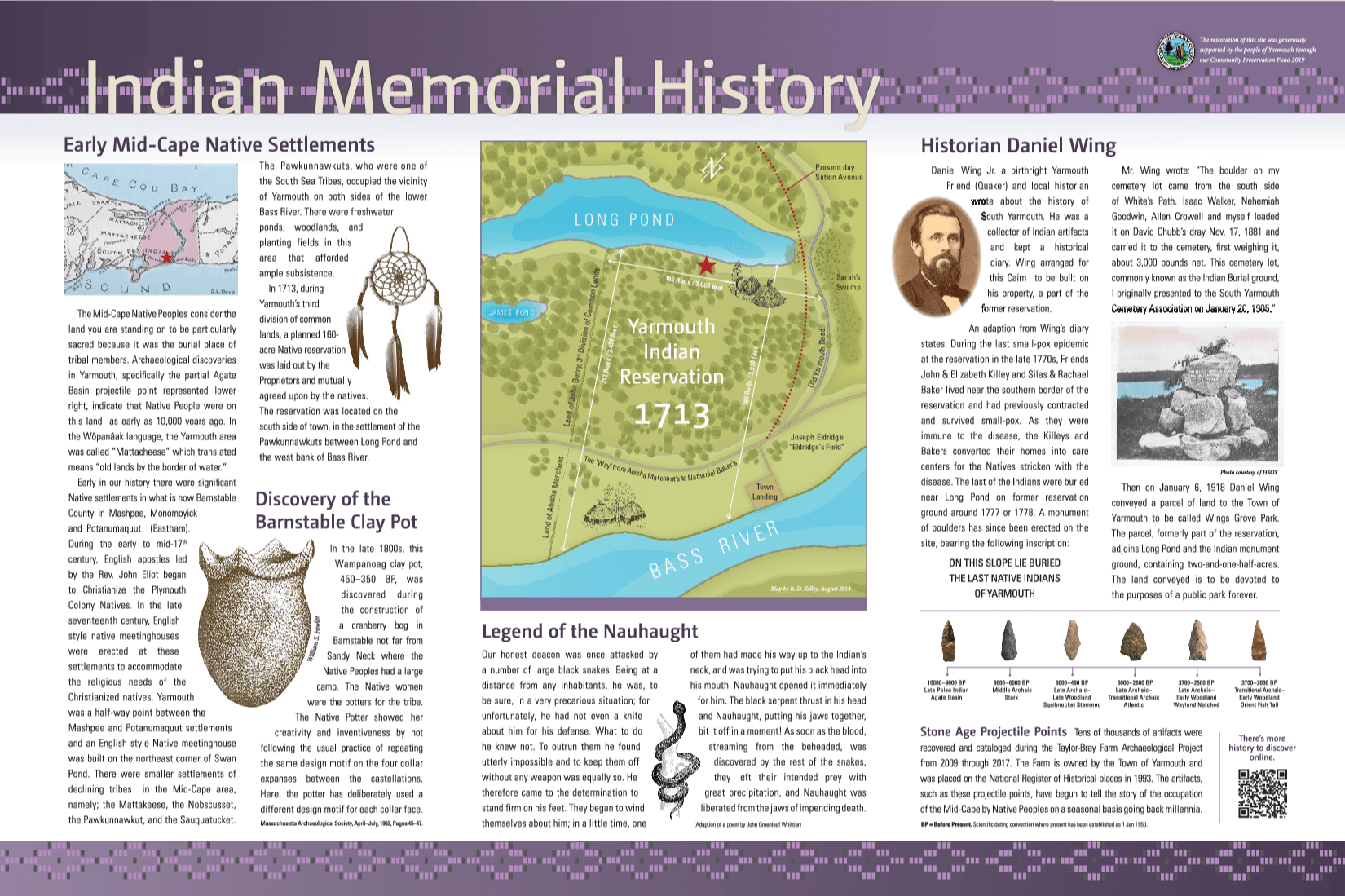 Further educational resources listed on this website convey a sense of the culture and history created by the Pawkunnawkut Tribe of the South Sea Indigenous Peoples.

The Scholarly Papers attached on this site present an English historical depiction of the Christianizing of the Indigenous Peoples living within the Plymouth Colony in the 17th century, along with some legendary writings.

Also, presented is the English historical account, through Town records, of the development and dissolution of the reservation at Yarmouth where the indigenous peoples were directed to live for sixty-five years in the 18th century.

Click here to view a graphic of the educational sign which has been placed at the Memorial site.

Contact the Historical Commission by email for further information.

To share an historical or favorite photo of the Indian Memorial, you may email it to the Yarmouth Historical Commission (YHC) for consideration. To add context, if known, please include the names of any individuals who are in the photo, date taken, and any other pertinent information. If selected and if you wish, the Commission will give you the appropriate attribution. Place your cursor over a photo to see additional information about it. Navigate through the photos manually by using the display arrows at either side, or the pagination dots at the bottom, of the display.